These Are The Women Changing Cannes

“70 years of Cannes, 76 Palmes d’Or, only one of which has gone to a woman. No comment,” joked legendary French actress Isabelle Huppert and co-host of the festival’s 70th-anniversary soirée. The audience applauded in agreement and with satisfaction. Well, Hupert's got it right: New Zealander Jane Campion won the prestigious Palme d'Or for The Piano in 1993. And she was the first and technically the only woman to ever receive the award.

Now, 24 years later, things are starting to change. The female narrative in movies has developed significantly in the past few years. This can be largely attributed to shifts in the industry and market landscape including actresses speaking out about equal pay, and stellar performances of female-led, box office films like Bridesmaids,  Frozen, The Hunger Games, Pitch Perfect and, more recently, Hidden Figures. There's also more space for great female-driven content in different formats than ever before.

While Cannes isn't a Hollywood affair — it has a much more  international perspective and many festival winners didn't make the final cut at the Oscars — it seems to have been influenced by the global feminist movement and is celebrating women in films for Cannes' biggest year yet.

From the poster to the jury, this year Cannes went full-force for female empowerment. After last summer's burkini ban in Cannes and Nice, it seems like the festival has opened itself up to more fresh ideas and special events made by and starring women. First on the list is the official poster, which features an archive photograph of Italian actress Claudia Cardinale. While there was a photoshop scandal surrounding the poster just a month ahead of the festival, it still shows a beautiful, lively woman representing the world's largest cinematic event. The official photos usually feature actors and actresses, and this year, a female legend was selected to commemorate a milestone for Cannes.

The master of ceremonies gig went to another international cinematic icon, Monica Bellucci. The Italian-French actress isn't unfamiliar with the festival, having hosted before in 2003 and served as jury member in 2006. And while the president of the jury is Spanish director Pedro Almodóvar, he has been a champion in creating stories about women with layered, complex personalities. He is joined by four female jury members including Jessica Chastain and Fan Bingbing. But what counts the most is the fact that this year's jury presidents across different categories are women. Uma Thurman leads the Un Certain Regard competition while the L'Œil d'or and Caméra d'or are also led by French actresses and directors. Yes, it would've been cooler if the panel consisted of an equal number of male and female members, but this year represents a step in the right direction. It shows cinephiles — and the world — strong female leadership in cinema.

To round up, the festival tapped French legend Isabelle Huppert, who was robbed at the Oscars but was still riding high, to co-host the 70th anniversary soirée. Not only did she slay the opening number by singing a bilingual birthday song that included some serious shade about the lack of female representation in film, she came out on stage to a well-deserved standing ovation which is, of course, so Cannes.

If there's one place where female-driven narratives and directors are celebrated the most, that might just be Cannes. Yes, women are not as well represented as their male counterparts, but the festival's official selections include works of the industry's female veterans and rising stars. At the very top of the list is Sofia Coppola's The Beguiled. Coppola, who won best director this year, turned to a 1971 film starring Clint Eastwood to create a remake with fresh perspective of its female characters, andThe Beguiled has met rave reviews. Promising young Iranian female director Anahita Ghazvinizadeh also screened her debut feature film They, which is a beautiful character study of a gender non-conforming teen. The other young director taking Cannes is actress Kristen Stewart, whose short drama Come Swim screened at a special event during the film festival, paving the way for Stewart as a serious industry figure.

As for Campion herself, she returned to the festival with arguably the best work at Cannes this year: the screening of the latest season of acclaimed TV series Top of the Lake starring Nicole Kidman and Elizabeth Moss. As many film directors are moving to the smaller screen, Cannes organizers made special events with a 7-hour screening of Campion's series and the first two episodes of the highly anticipated revival of Twin Peaks by David Lynch. The new season of Top of the Lake had the whole festival talking about Campion's fearless portrayal of multi-layered, flawed female characters whose lives are complex and intriguing. Lastly, the opening film of the festival, Ismael's Ghosts, by Arnaud Desplechin, is a drama that — while the title is derived from the film's male character — is really about its two female leads, Marion Cotillard and Charlotte Gainsbourg, who both gave stellar performances in the movie.

The red carpet at Cannes always features hits and misses when it comes to fashion. Given it's a European festival, you can expect some fresh, new faces hitting the carpet as well many a top model that sometimes leave us asking the question: what is she doing at the biggest event in cinema?

To answer that question for you: Chopard and L'Oréal are major sponsors of the film festival, so their ambassadors often attend Cannes premiers. So, you can expect some serious fashion fun — and that's not an oxymoron. This is not the Oscars, and the breeze from the French Riviera can transform any silk chiffon gown if caught at the right moment (we are talking about Kendall Jenner in Giambasttista Valli Couture at the120 Beats Per Minute). Many times, the models can steal away too much attention from the actors and actresses in attendance, but this year, things played out differently. Some actresses came to Cannes ready to compete with an all-around impressive portfolio consisting of knock-out performances on-screen and gorgeous looks on the red carpet. French actress and singer Charlotte Gainsbourg showed up in a Saint Laurent crystal-encrusted mini dresses and smoking suits that brought the house down just like her performance in Ismael's Ghosts, showing off just how one wears alternative red carpet attire. Her co-star Marion Cotillard had no Fs to give, going all out after getting unceremoniously dropped by Dior according to The Hollywood Reporter. The French actress in Y/Project is one of the most badass looks anyone pulled off.

However, Cannes 2017 belonged to Elle Fanning and Nicole Kidman. Both co-star in two different films that premiered at the festival and both have perfected the art of red carpet. Fanning amped up her whimsical style with a dose of French elegance, making her debut appearance in a unicorn-painted Vivienne Westwood couture creation. She closed in a Degas-inspired custom gown by Rodarte, with some feathery casual looks along the way.  At the age of 19, Fanning has played a variety of challenging roles and proves to be fearless both in front of the camera and in her sartorial instinct. And just as Fanning's purple gown looks to be the perfect fit for a princess, Nicole Kidman, who will celebrate her 50th birthday this year and now, the surprise award of Cannes' 70th anniversary prize, still reigns as Hollywood royalty. This has been an astounding year for the Australian actress so far. Her hit HBO series, Big Little Lies, won over critics and received great ratings. She also had four features shown at Cannes. The Oscar-winning actress is known to take some risks for her work projects,  and this year her characters range from a '70s punk (whose wig rivals the locks of David Bowie) to a mother in a lesbian affair. With impressive work on display throughout the festival, Kidman also turned up the heat in the realm of style. Our favorite has to be the simple black-and-white Calvin Klein by Appointment dress. She carried it with conviction and pulled it off gloriously, looking like a movie star who means business.

Inspired? Shop these looks and channel your inner movie star. 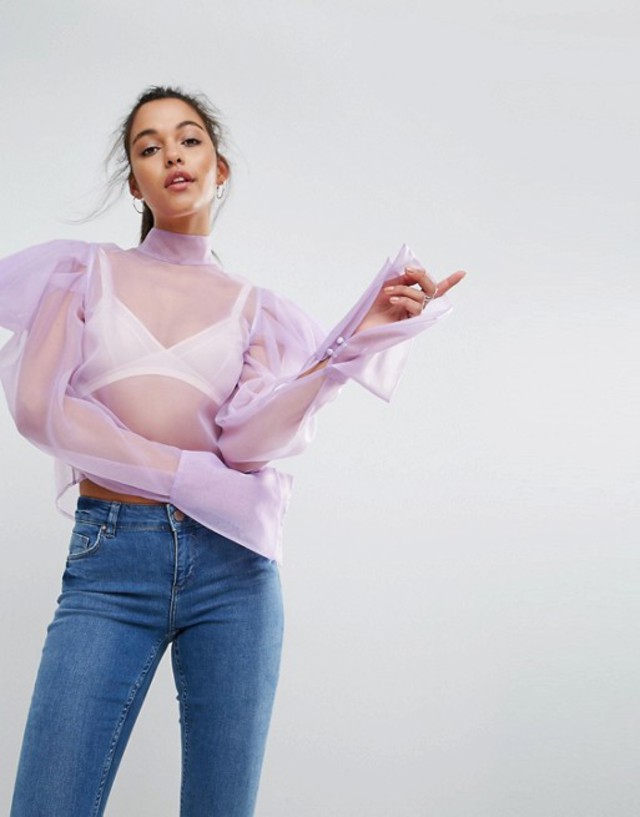 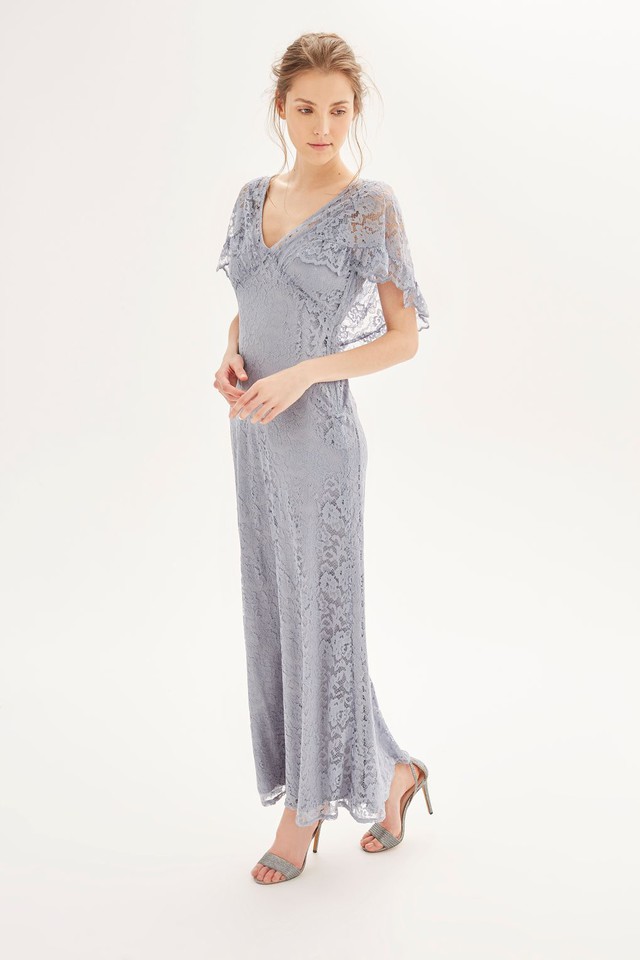 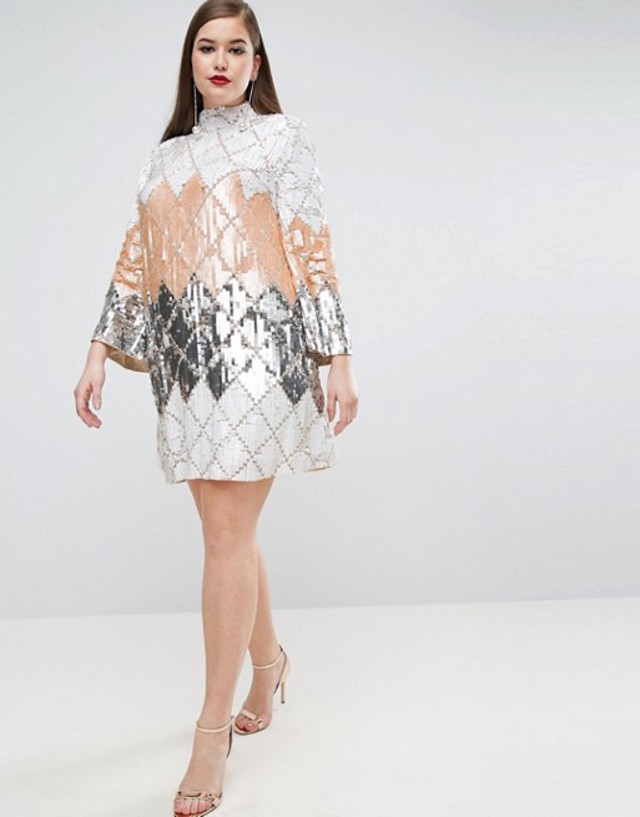 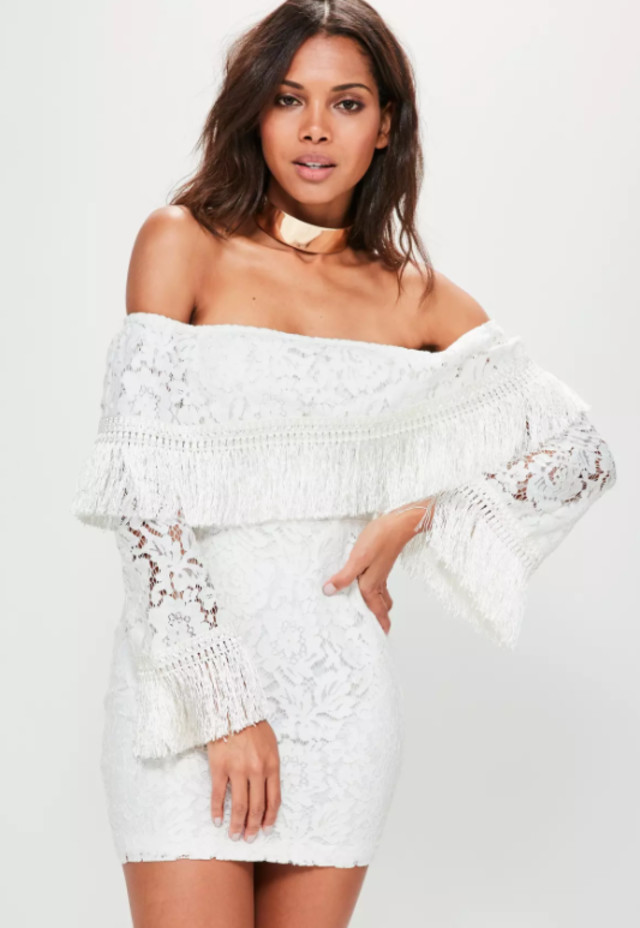 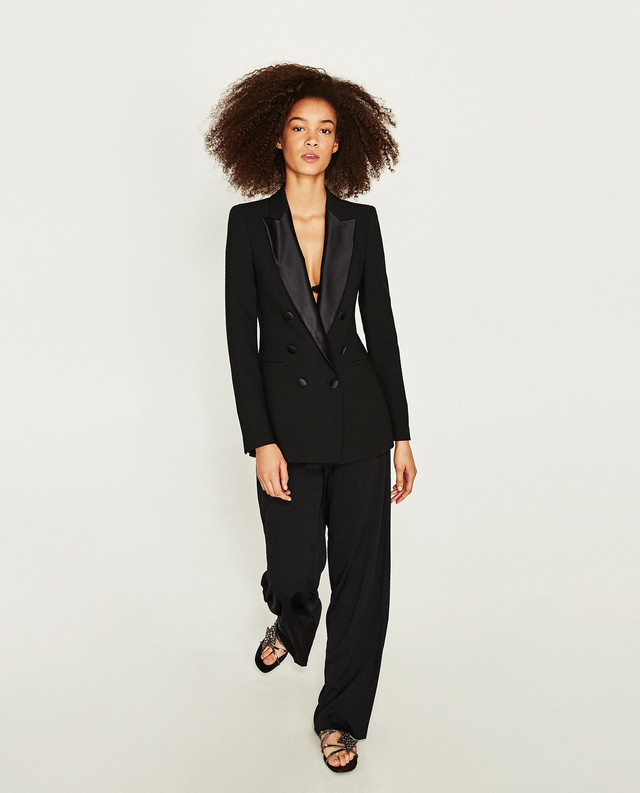 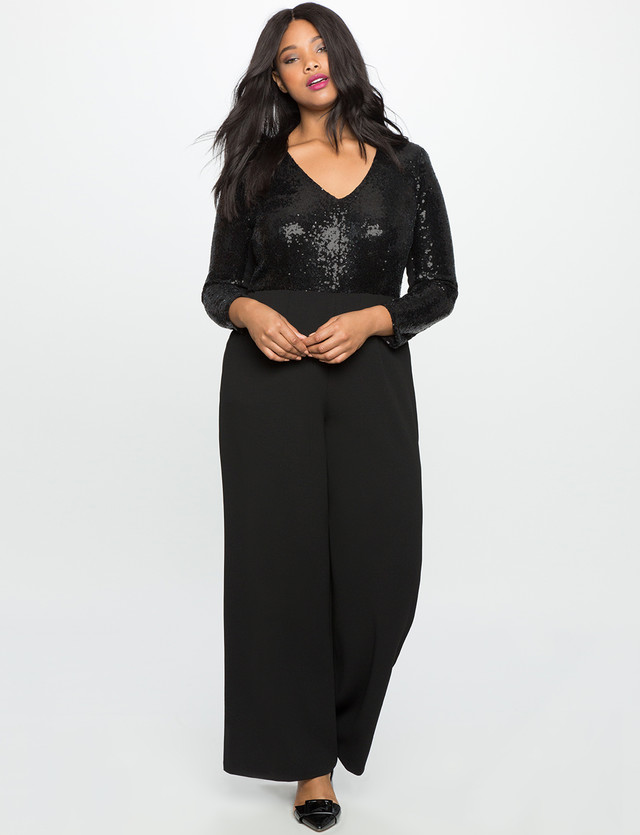 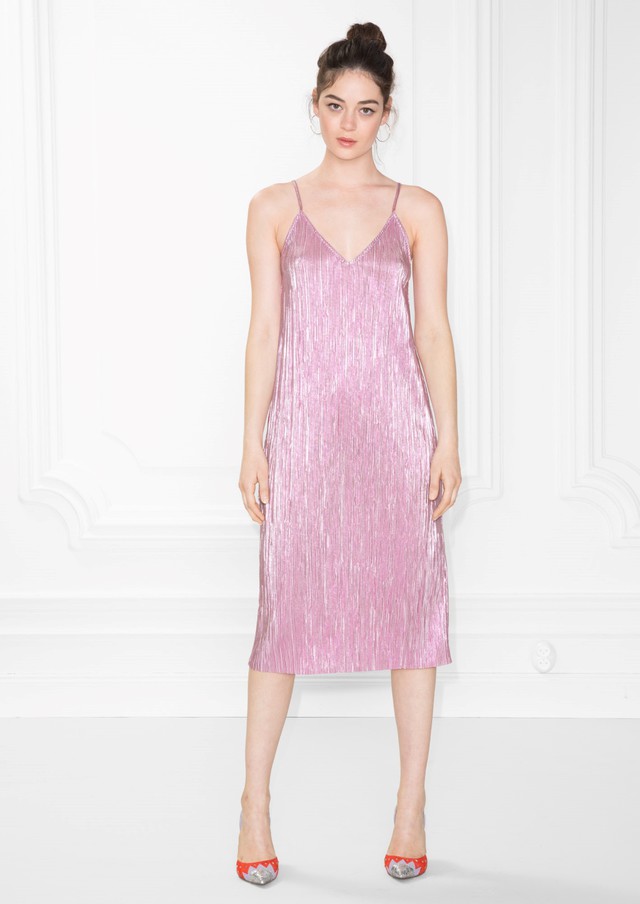 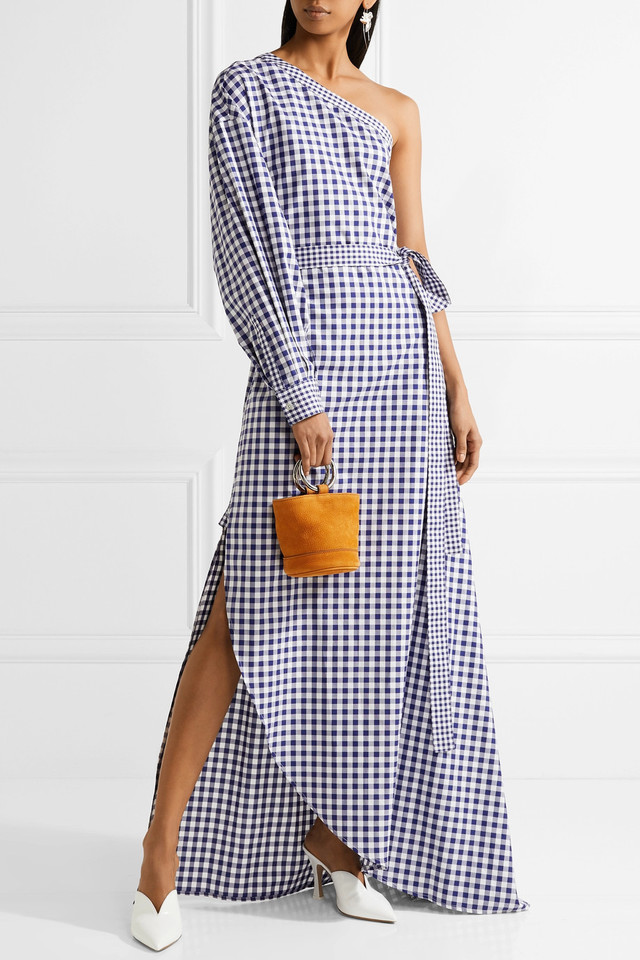 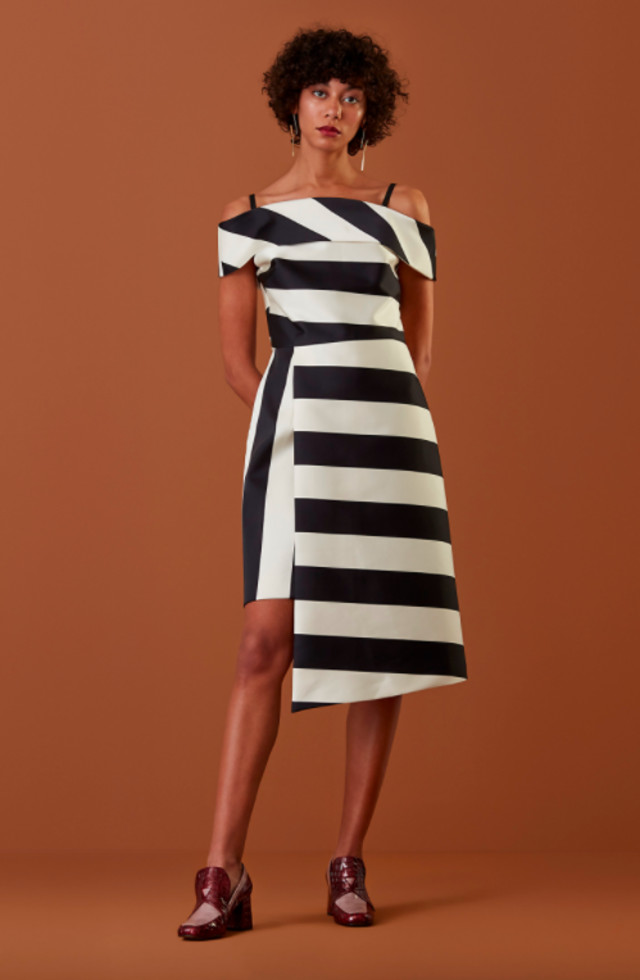 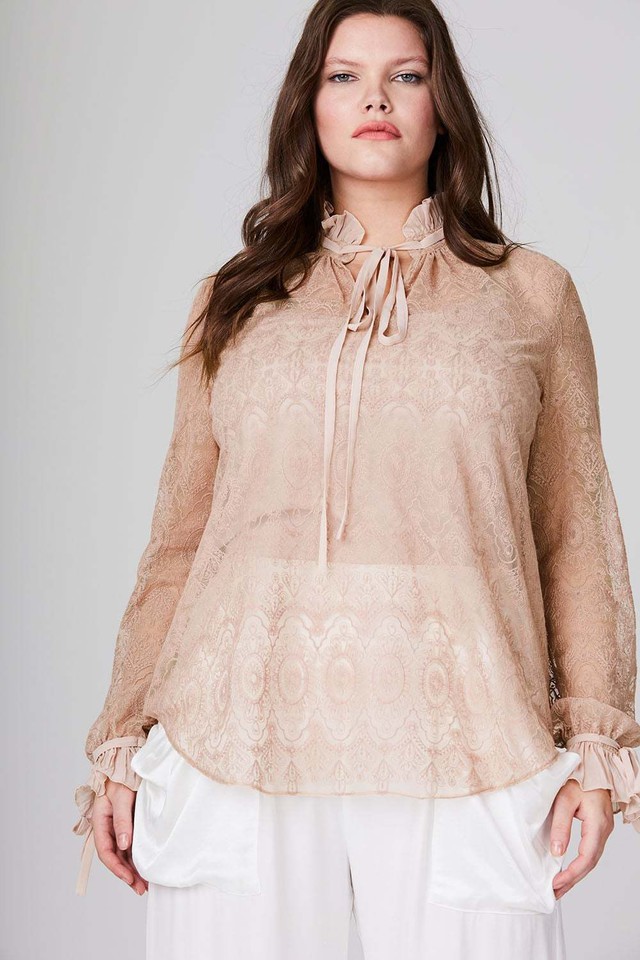 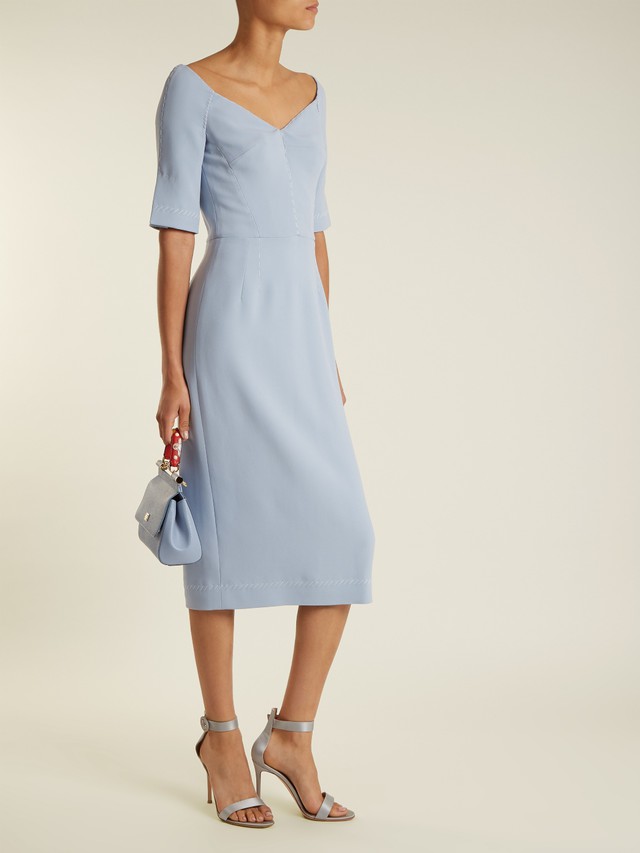 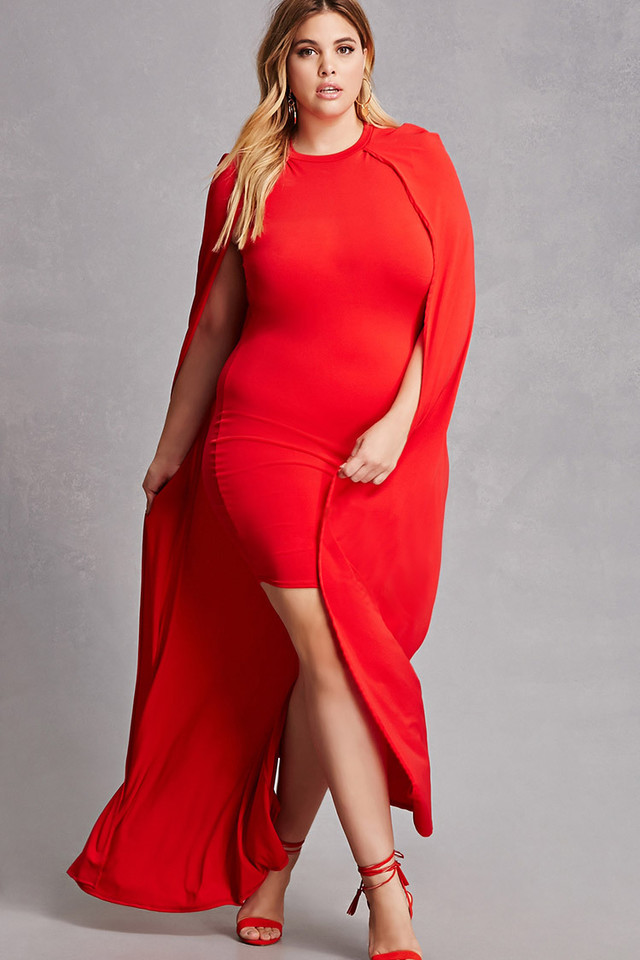 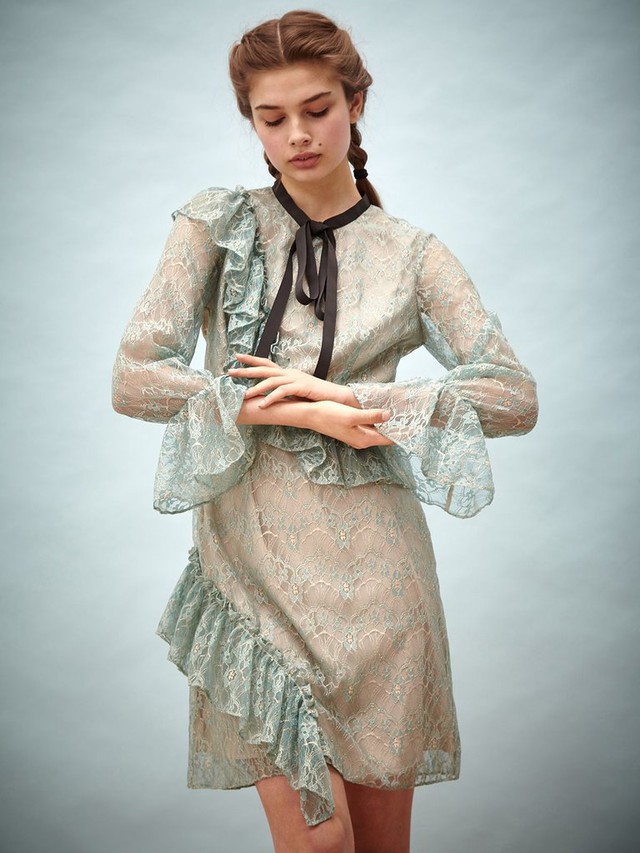